One of the challenges I am going to find with this writing experiment is how to describe the people I write about. I am going to really have to work my inner thesaurus to avoid calling every photographer I profile “my favorite”. To be perfectly honest, I find the premise that one artist can be “better” than another difficult to come to terms with. In reality, every artist I am drawn to is, indeed, my favorite. It may be based on the mood I’m in that day, maybe because of something that reminded me about them; certain artists tend to dominate my attention for a while, then fade into the background.

With music that has always been the way I worked. Right now I’m in the middle of a long hip-hop phase that started with the untimely passing of Adam Yauch of the Beastie Boys, which then led me to The Roots (who I am listening to right now), and is phasing into repeated listenings of Saul Williams, which will likely lead to several weeks of Nine Inch Nails.

This is going somewhere, related to photography, I swear (I think). Hang in there.

A few years ago, I would haunt the photography section at Chapters, looking for the latest photography how-to that would answer all my questions and make me a famous and rich photographer. Bit by bit, I found my gaze shifting left on the shelf, towards the photography collections, away from the “instructional” books. There was one that always grabbed my attention, with a giant picture of Janis Joplin on the cover, but every time I looked at the book, it was shrink wrapped; the well-behaved polite young man I am would not allow me to tear it open and look inside. One day the cover caught my eye, and beside it was a crumpled pile of cellophane.

I grabbed it, started leafing through the pages, and was floored. Though I didn’t buy the book on that visit, A few weeks later Leah gave it to me as a gift, after I described how much I liked it. 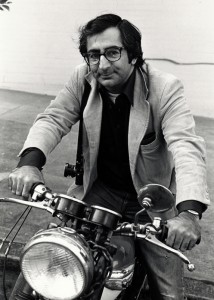 That book was called Trust, by photographer Jim Marshall. It is one of the first photography collection books I owned, and it changed (literally) how I looked at books about photography, and photography itself for that matter. I come back to it often.

You have seen Jim Marshall’s work, I can guarantee it.

Marshall can easily be described as one the most important photographers in popular music. Looking through his work, it almost seems unreal how he could find himself and his camera around so many iconic figures, often fitting 5 or six of them into the same frame.

Jim was the chief photographer at Woodstock in 1969, and the Monterey Pop Festival in 1967. He was the only photographer given backstage access to the Beatles last concert. The access he was given would be a dream for any photographer, and turned it into some of the most important pop culture work of the later twentieth century.

From anybody who worked with him, Jim was known as a very complex person. He didn’t care if he offended somebody, and would fly off the handle at small and seemingly miniscule misunderstandings. He was also very hard on his body, fully embracing the sex, drugs & rock and roll mentality of the times. 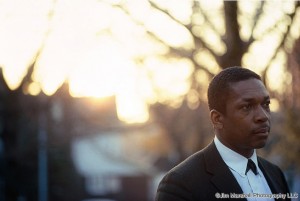 Some of my favorite work (if I have to choose) of his is of jazz legends John Coltrane, and particularly Miles Davis (I have to admit, I have a trumpet bias). Jim’s shots of them were some of the first portraits that I ever saw as more than a picture of a person. He grabs their souls, and you can see what makes them who they are. What is beautiful about this is that even though you can see it, it is almost impossible to describe it to someone else, they need to see it too, so they can understand.

In the pages of Trust, Jim tells the story of getting to work with Miles Davis, an equally complex and, let’s say, direct person, but one that was one of Jim’s  musical heroes: 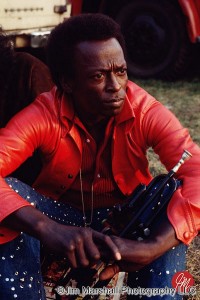 In passing by Miles backstage at some point in the early 60’s (he doesn’t specify exactly when), Jim tried to strike up a conversation and asked “Hey, Miles, why do you play a green trumpet?” Miles responded “Motherfucker, why you askin’ me about the color of my trumpet? I don’t ask why you are using a black camera!”

That would have been it for me. I would have ran with my tail between my legs and crawled under my bed in the fetal position. I suppose it was somewhat similar to Jim. But he tried again.

At a later event, he brought a copy of one of his portraits of John Coltrane, handed it to somebody and asked them to give the print to Davis. When he received the picture, he excitedly went over to Marshall to thank him, and tell him that Coltrane is one of his favorite musicians. Jim Marshall replied “Yeah, I know.”

Then, and this is my favorite part, Miles Davis asked him “Why don’t you ever take pictures like that of me?” Jim’s reply:

I love this story. I love everything about it. The interaction between two people I look up to immensely, but would have been terrified to meet in person. The fact that one was terrified of the other. The fact that they are both such forces of nature, and that in order to come together they had to almost ricochet off each other first.

And I’m glad that they did. When I was first leafing through Trust, the photos of Miles stopped me in my tracks and moved me, changing how I felt about photography forever.

When I got home after discovering the book, I started researching Jim Marshall. He passed away in his sleep on March 24, 2010. That was just a few weeks before I found out about him. For some reason that makes me sad, like I found him too late. One of my goals for this part of the blog is to send a small list of questions to photographers who inspire me. Questions like: what do you love about photography, what is your favorite photo that isn’t yours, who would you like to shoot that you haven’t. I would have liked to send it to him. He probably would have told me to screw off.

And it would have been awesome.

This video is a great insight into who he was. It also blows my mind at 2:08, considering this year we also lost Jim Marshall of Marshall Amp fame. 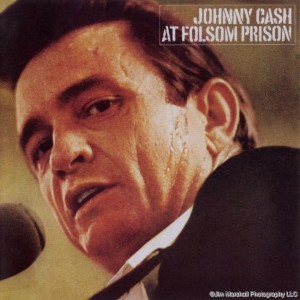 Jim never had any children, but he considered his photos to be his offspring. Upon his death he left everything to his assistant, Amelia Davis. She formed Jim Marshall Photography LLC with the goal of preserving and protecting his legacy.

I can’t recommend checking out the website enough. I’ve spent hours there looking at his work, and watching interviews with this legend.

That, or you could just leaf through your record collection, his work is probably in there too.

All images in this post are ©Jim Marshall Photography LLC