So here it is; the first of my try-and-keep-to-a-schedule posts. Mondays posts are going to center around music. Cause, you know, they both start with M. Very groundbreaking, if I do say so myself. My girlfriend is also very impressed and in no way laughed at me.

Because Leah and I are both musicians, we spend a lot of time around other musicians. Photographically speaking, live music is among my favorite things to shoot. It is definitely the only thing involving people that I can shoot without second guessing myself.

In these posts my goal will be to centre on a particular artist I find inspiring, and what surrounded the particular shots I share.

Since this is my first post, I figure I’ll start with the most recent I have seen; arguably the most well known artist as well.

Last week, Leah’s workplace, The Grand Theatre, played host to Henry Rollins. I found out about the show a few months back and got tickets right away. It was well worth the price of admission. Rollins gave up music (his words) years ago, and does amazing spoken word shows, as well as television and movie work.

He is best known, musically at least, for fronting Black Flag, widely considered to be central in the development of the underground punk scene that came up around the mid to late 80s. Though I don’t consider myself a huge fan of hardcore punk, there is no doubt that Rollins was a huge influence both directly and indirectly on my taste in music and how I thought about it.

If you get a chance to see him live, take it. Though you could describe it as “a cool guy tells you cool stories for three hours” its much, much more than that. First off its three hours. No water, no break, no props. I’ve never seen anything like it. It feels like he’s just talking unrehearsed, directly to you, in your seat. He’ll be telling a story, then branch off into another related story, and merge back in 45 minutes later, seamless.

As far as subject matter, the stories are indeed cool. From road tales with Black Flag to wrestling alligators for National Geographic, to politics and to what punk-rock means to him. There was so much. As I type this I’m killing myself to remember a particular thing he said that I thought I should write down, and I can’t remember for the life of me, because there was simply so much cool stuff.

One message I did get from the show as a whole was to just try the things you think you are afraid of. He didn’t say it directly, but thats what I took from it. And this is where we swing around back to photography.

Anybody who knows me, knows I don’t really take a lot of photos of people. I get nervous and I forget to check settings. I get shy and hesitant to direct the person I’m shooting. I am terrified of going up to a stranger and asking to take a picture of them. I don’t know why, but I am.

Sitting listening to Henry talk, I decided I was going to ask to take his portrait after the show. I had everything I would say planned out in my head. I was gonna check my settings right after the show and make sure everything was right, I was going to take my flash off the camera and light it off axis. It would all go fine and I would see that I wouldn’t have to be nervous.

So the show ended, Leah, some friends and I went out to the stage door to wait. When he came out we introduced ourselves and asked if we could get some pictures with him. He said sure so I  handed the camera to my friend and they snapped a shot. Then we traded and I got a shot of them. I wasn’t looking for anything spectacular, just a memento of our meeting. 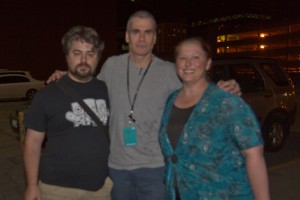 Bad focus wasn’t my friends fault, I should have put it on auto 🙁 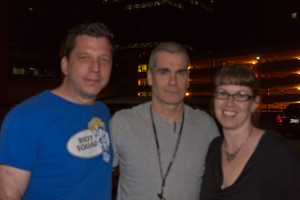 Not sure what my excuse was, using my own camera and all….

Though it would have been nice if either of them were in focus. This is an example of what happens when I get in front of a subject. I forget to check things, just little things, like what the picture looks like. I suppose I didn’t want to waste his time, or look stupid, or both.

Since we had gotten all our pictures taken, I asked if he would mind if I took a portrait of him. It did not come out like I thought I was going to say it. Again, he said sure. He is an extremely nice guy, and very patient. I snapped a quick shot, thanked him and retreated. I didn’t take the flash off, didn’t think about lighting. Upon getting to the van and seeing the quality of the group shots,  I was terrified for how the portrait turned out.

A little bit of processing in lightroom, and I am very happy with the result. I’m glad I asked for the chance, but am pretty sure the next time I do it will be just as nerve wracking. At least I know it will be worth it, so I’m likely to try again.