Ok, I am going to try to get this post done quick. I had this big lofty idea that I would be able to sit down on a Sunday and write two months worth of posts. That is not going as planned. It takes much longer to write about things I like than I thought. Hours longer. I spend a lot of time with the backspace key.

But I don’t have much time today, and this is going to be a busy week (month, year, rest of life), as the purchase of our new home closes tomorrow! 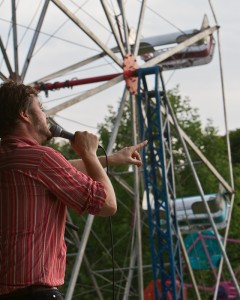 For my music Monday post this week I’m going to talk about Toronto singer-songwriter Corin Raymond.

Although I’ve known Corin for a few years, he recently spent some time here at the London Fringe Festival, and I figured I should write about him and help get the word out before his current summer tour is over.

Corin can almost be considered an institution in the Toronto roots scene. He’s part of The Undesirables, and The Sundowners (whose other members, as well as the group themselves, will no doubt be featured here at some point). In addition to that, he writes and performs his own solo material, both theatrical performances as well as musically.

I first saw him perform at the Home County Folk Festival in 2009, in his duo The Undesirables, with fellow singer-songwriter Sean Cotton. I was immediately struck by how much of himself he gives to the audience. It’s not unusual to watch a singer simply hold the mic, maybe move their hands and feet to the music a bit. Not Corin, he involves his whole body in the song, and truly communicates with the crowd. 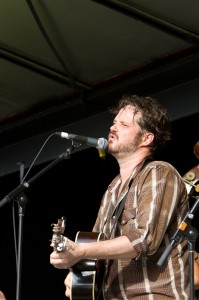 You may have seen or heard of Corin recently on the news. He is in the process of creating an album of his favorite Canadian folk and roots songs. That in itself is pretty cool, but what really sets this apart is that the studio he is working with will accept Canadian Tire money as payment. To date he has raised over $4000 in “paper nickels and dimes”. That means over $1,000,000 was spent at Canadian Tire to earn that much. Corin calls it his first million dollar record. It is expected to be released sometime in the Fall.

What really makes me want to write about him right now is not so much his music, but the show he performed at this years London Fringe Festival. Bookworm. Aside from getting rave reviews, he also won the Producers Pick award, which is essentially a best in show as decided by the folks putting the festival on. 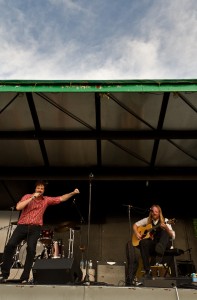 Bookworm is a one man show, starring Corin, in which he talks about his childhood and how much of an impact literature has on him, particularly the work of Ray Bradbury. Corin’s energy in his presentation on the theatrical stage is no different than his music performance. He gives everything he can to his audience. In an hour, with no more on stage than a stack of books, he manages to build the walls of his childhood around you.

I can’t recommend this show enough. He will be touring the show to the Winnipeg Fringe Festival from July 18-27, Edmonton Fringe August 16, Victoria Fringe August 12, Vancouver Fringe September 6 and the Words Aloud Festival in Owen Sound on November 2.

You can find out more about Corin, Canadian Tire Money and Bookworm at his website: www.dontspendithoney.com. It also has a comprehensive schedule of upcoming show dates.