David duChemin (Or Long overdue article I should have written a long bloody time ago, sorry David)

Before I get to talking about David duChemin:

You know when you get am email or voicemail from someone, and you think “I should reply to that. I’ll do it in an hour”. Then something happens 55 minutes later, and you find yourself 2 days later thinking “Crap, I forgot to reply, I better do it soon, or they will think I don’t care.” Then something happens and you find yourself three weeks later thinking “Crap, I better reply NOW, cause now it totally looks like I am ignoring them..” Then 3 months later…

You get the idea.

The same thing happens with blog posts, to me, also. Way back when I was launching this thing and I was all “YAY new thing I’m excited about!” I had this idea to send a small list of questions to photographers I respected, and do little profiles on them. I did a few of photographers that were no longer with us, and enjoyed it. Busy photographers are busy, what with all the world travel and actually working and stuff, and the reply rate was, well, not really there.

Which is OK, I expected I’d have to do a bit of legwork, this little blog isn’t exactly The New York Times, so I’m sure if my email made it though the spam filters, it likely ended up in it’s own “Oh crap, I should do that” loop before spiraling down into being forgotten.

So I re-sent a couple requests, and got one back! I was pretty excited. Then our world turned upside down, and the next year and some was spent dealing with the illness and eventual loss of my father, and the whole photography and writing thing kind of took a backseat for a while.

Well I’d like to get it started again. Even if this is the only article I write, I owe it to David for actually taking his time and responding.

So enough excuses, here we go (also, sorry again that this took so impossibly long):

When I started taking pictures, it was just for the fun of it (it still is, really). I enjoyed learning new techniques, dreaming of new gear and gadgets, getting new gear and gadgets, and eventually putting new gadgets in a drawer never to be seen again. It got to a point within a few years that people wanted to spend money on my pictures. Not a lot. Just some, but it was enough that it got me thinking about “going pro”. I got books on budgets and business management and they ended up with all the miracle gear in the drawer.

The worst thing to end up in the drawer alongside the books and gadgets was my enjoyment of photography. I got so wrapped up in my theoretical “business” that I forgot how to enjoy taking pictures. I stopped shooting and my camera almost ended up on the drawer too. It’s a big drawer.

That Christmas, I got a gift card for Chapters from my grandmother. Almost out of instinct I went to the photography section, and just randomly grabbed a book off the shelf.

That book was VisionMongers: Making a Life and a Living in Photography. It totally shifted my perspective. While the book talks about moving into vocational photography, it talks a lot about staying true to your actual vision, and remembering what got you tripping shutters in the first place. I love this book. Both for the lesson contained within, but also for the different artists it introduced me to and their experiences and points of view.

David does a lot of things. He’s an amazing travel and humanitarian photographer. what always strikes me about his work is how hes able to capture emotion, tell the stories, but it never feels like the subject isn’t part of the process. I find with some travel shots that it can seem like “Hey, look how different his person over here is, see how different hey are?!?” Davids work doesn’t do that. I don’t know how or why, but when I see his work I feel more united to everyone else.

If I had to guess at a reason, I think his vulnerability plays a role. As I read the book (then read more of his books) and started following him online, I felt like I was let into his process. He has an honesty and vulnerability that I think informs his talent, both as an author and as a photographer. Following him online, I got to see not only the work of the photographer/author, but also the other details, getting new vehicles, travels, injuries (be more careful), recoveries and other behind the scenes things.

Through Visionmongers, I was introduced to several other photographers, many that I still follow today. Now that I think about it, I suppose I’m sort of lifting the idea of profiling other artists from his book. I didn’t realize that till right now.

Over the years I have sort of drifted away from the whole “photo-education” industry that seemed to take slowly morph every site I followed into courses for wedding and baby photographers. Not that those aren’t challenging and artistic paths for a photographer, I just started to see almost everything selling the “dream” of being a photographer, and no one talking about inspiration and art. (plus I got really sick really fast of people making heart shapes with their hands and super cute bokeh).

David is an exception to that. His educational books strike a great balance of technique and inspiration. Somehow, he can describe changing a Lightroom slider and talk about the change in feeling  it should create.

In that , David created Craft and Vision, a collection of educational and inspirational e-books. Like the profiles he added in to Visionmongers, David doesn’t take all the attention himself, rather giving other artists a voice as well, even his manager gets a word in for the business/creative perspective. These books are great, and I have a nice little virtual library of them (even managed to have one of my photos published in one of them!). I highly recommend any of them, but I’ll put a list of links to my favorites at the end.

Aside from the fantastic photographic work and great books, David has also done some photo tours and gives talks. Though I haven’t been lucky enough to see them live, I did get to see him present a class in a very early CreativeLive, as well as several for the Manfrotto School of Xcellence. Based on those I can highly recommend that if you have a chance to see him speak, you should take it.

So without further ado, here is my little interview with David:

What do you love about photography (industry and/or craft):

Photography is about light and time. Those are the two rawest materials, without which we’d not have our art. Photography opens my eyes to both in a way I don’t think I’d experience otherwise. It gives me a way of looking at the world with greater intention, and of expressing how I feel about the world. It makes me see places, people, light, and moments, in new ways – to pay attention to things others might dismiss as mundane. And it opens doors for me. I’ve traveled the world with my cameras and they’ve always created more experiences for me than not having them would have done.

What do you hate/dislike/want to change/wish you could ignore etc. about photography (industry and/or Craft):

Photography is necessarily tied to the gear we use to create the photographs, and for some reason photographers often seem a little fonder of their gear than I think is helpful if your goal is creating compelling photographs. We could do with more photographs and less gear. But then that’s life. Some people play guitar, others just collect them and talk about them. The ones who really make art will do so no matter how old their camera is, or what brand it wears.

Who is your biggest influence as a photographer:

That’s a hard one. I think people expect me to name a photographer, and there are plenty, but I think most of us have to credit an ever-changing list of influences – the books we read (right now it’s a biography of Van Gogh and one on Monet), the music we listen to, TV we watch, and most of all the real live humans we surround ourselves with. It’s important to keep our eyes open, find inspiration and influence in all corners. If what you mean is, Which photographer is my biggest influence, that changes too. Right now it’s Salgado. In fact, oddly, most of my influence comes from black and white photographers, though I’m more of a colorist myself.

What is your favorite photograph, and why (not yours):

I’m terrible with favourites. Every time someone asks me about favourites I fell like I’m just making stuff up; my favourite today will be different tomorrow. But I can tell you my favourite images are those with a strong emotional connection. That could come from a great moment or amazing light or colour, or a conceptual contrast that tells a really compelling story, but something in the frame has to make me care. I know that’s a cop out, so if I had to be pinned down, I’d say anything from Elliott Erwitt.

What is your favorite photograph, and why (yours):

It used to be whatever my most recent work is, but increasingly I feel like that work needs to sit a while, like a bottle of wine. I need to live with my work for months, even a year or more, before I’m sure it’s really as powerful as I tried to convince myself it was when I first made it. A little time gives a lot of perspective. Right now some of my favourites are black and white images from India and Vietnam a few years ago. The memories have kind of mellowed and allow me to see the photographs a little more objectively (whatever that means). 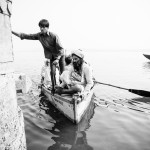 Varanasi, A boat comes in to shore on the Ganges. Rendered in a sepia and purple split-tone. Image ©David duChemin 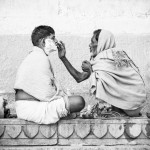 Varanasi, A man has a shave on the ghats at the anges River. Rendered in a sepia and purple split-tone. Image ©David duChemin 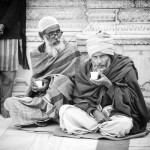 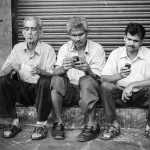 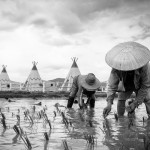 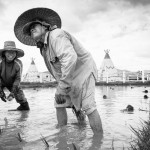 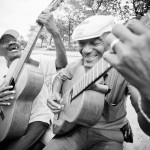 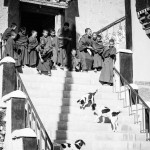 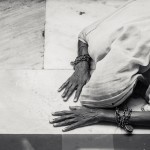 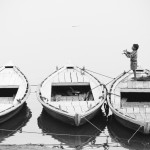 Varanasi, Three boats on the Ganges River, a young boy tries to catch a falling kite. Rendered in a sepia and purple split-tone. Image ©David duChemin

What/who would you love to shoot that you haven’t yet:

It’s funny but the photographs I most want to make right now are all in places I’ve already been. The longer I do this the less I feel the need to fill the pages of my passport or my portfolio, and instead want to go back to places I’ve not explored deeply enough. Iceland, Antarctica. But most of all I’m longing to go back to northern Kenya and continue the work I’m doing there with the BOMA Project among the nomadic pastoralists. I feel at home there and like I’ve only scratched the surface of that work. I head back in a year, after another round of surgery on one of the feet I injured in Italy a couple years ago. I can’t wait.

Addendum: Because it took me soooo long to write this, David has found the time to go to Kenya, and also come back, and also write another great book about his work there. So, yeah, I gotta get better at this. But yay David!!

http://craftandvision.com/ – A fantastic collection of e-books to improve your craft

My favorite books on Craft & Vision:

Your Creative Mix – Balancing creativity and business, by Corwin Hiebert